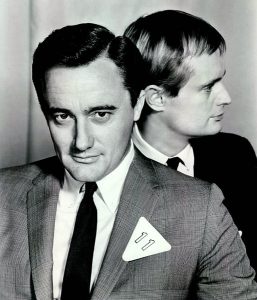 Robert Vaughn is a well-known actor of stage, television and cinema… but did you know he also proudly served in the United States Army, most notably as a Drill Sargent? Robert Vaughn is another in another in a long list of Famous Veterans who are unique in the fact that they all wore a military uniform at one time or another in their lives! After spending some time at the University of Minneapolis, then studying acting at several colleges in Southern California, Robert Vaughn landed several acting jobs in television and was slated to begin production on the movie, “Sweet Smell of Success” but was drafted into the Army.  Vaughn spent the next two years on active duty, primarily as a Drill Sergeant. Once separated from the Army, Vaughn went on to have a very successful career in stage, film and television productions.


Film Actor: The Ten Commandments, Hell’s Crossroads, No Time to Be Young, Teenage Cave Man, Unwed Mother, Good Day for a Hanging, The Young Philadelphians, The Magnificent Seven, The Big Show, The Caretakers, To Trap a Spy, The Spy with My Face, One Spy Too Many, The Glass Bottom Boat, One of Our Spies is Missing, The Spy in the Green Hat, The Venetian Affair, The Karate Killers, The Helicopter Spies, How to Steal the World, Bullitt, If It’s Tuesday, This Must Be Belgium, The Bridge at Remagen, Julius Caesar, The Mind of Mr. Soames, The Statue, Clay Pigeon, The Man from Independence, The Towering Inferno, Wanted: Babysitter, Atraco en la Jungla, Demon Seed, Starship Invasions, The Lucifer Complex, Brass Target, Good Luck, Miss Wyckoff, Cuba Crossing, Virus, Hangar 18, Battle Beyond the Stars, S.O.B., Superman III, Great Transport, Black Moon Rising, The Delta Force, Hour of the Assassin, They Call Me Renegade, Killing Birds, Skeleton Coast, The Emissary, Captive Rage, That’s Adequate, C.H.U.D. II: Bud the C.H.U.D., River of Death, Transylvania Twist, Buried Alive, Nobody’s Perfect, Going Under, Blind Vision, Dust to Dust, Witch Academy, Joe’s Apartment, Milk & Money, Menno’s Mind, Motel Blue, Vulcan, An American Affair, Visions, McCinsey’s Island, The Sender, BASEketball, Pootie Tang, Cottonmouth, Happy Hour, Doug McPlug: The Life and Times, Hoodlum & Son, Scene Stealers, 2BPerfectlyHonest, Gang Warz, Excuse Me for Living, The Magnificent Eleven, A Cry from Within, The American Side and Gold Star (in the year of his death)